I have previously written about Morris's reworking of a short Welsh folk tale into the story "Sion ap Siencyn", in not one but two blog posts at one of my other blogs, A Shiver in the Archives, in a time before I started this Kenneth Morris blog.  The two posts are accessible here and here.

Now I'd like to post the original inspiration for Morris's excellent tale "Red-Peach-Blossom Inlet", which first appeared in  The Theosophical Path for October 1916, and was collected in The Secret Mountain and Other Tales (1926), where it was accompanied by a wonderful illustration by K. Romney Towndrow (reproduced at right).

The first survey of Chinese literature to be published in English was A History of Chinese Literature (1901), by Herbert A. Giles. Morris may have had another source, but I copy here a few paragraphs from Giles's book giving the germ of the story which Morris elaborated upon in his tale.


We now reach a name which is still familiar to all students of poetry in the Middle Kingdom. T’ao Ch’ien (A.D. 365-427), or T’ao Yüan-ming as he was called in early life, after a youth of poverty obtained an appointment as magistrate. But he was unfitted by nature for official life; all he wanted, to quote his own prayer, was “length of years and depth of wine.” He only held the post for eighty-three days, objecting to receive a superior officer with the usual ceremonial on the ground that “he could not crook the hinges of his back for five pecks of rice a day,” such being the regulation pay of a magistrate. He then retired into private life and occupied himself with poetry, music, and the culture of flowers, especially chrysanthemums, which are inseparably associated with his name. In the latter pursuit he was seconded by his wife, who worked in the back garden while he worked in the front. . . .

The “Peach-blossom Fountain” of Tao Ch’ien is a well-known and charming allegory, a form of literature much cultivated by Chinese writers. It tells how a fisherman lost his way among the creeks of a river, and came upon a dense and lovely grove of peach-trees in full bloom, through which he pushed his boat, anxious to see how far the grove extended.

“He found that the peach-trees ended where the water began, at the foot of a hill; and there he espied what seemed to be a cave with light issuing from it. So he made fast his boat, and crept in through a narrow entrance, which shortly ushered him into a new world of level country, of fine houses, of rich fields, of fine pools, and of luxuriance of mulberry and bamboo. Highways of traffic ran north and south; sounds of crowing cocks and barking dogs were heard around; the dress of the people who passed along or were at work in the fields was of a strange cut; while young and old alike appeared to be contented and happy.”

He is told that the ancestors of these people had taken refuge there some five centuries before to escape the troublous days of the “First Emperor,” and that there they had remained, cut off completely from the rest of the human race. On his returning home the story is noised abroad, and the Governor sends out men to find this strange region, but the fisherman is never able to find it again. The gods had permitted the poet to go back for a brief span to the peach-blossom days of his youth. (From pages 128-131) 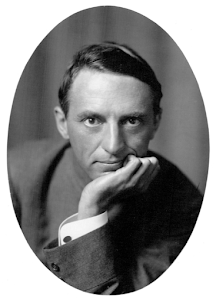 Douglas A. Anderson is the author of The Annotated Hobbit (1988; revised and expanded edition 2002). He is currently Book Reviews Editor of the peer-reviewed online Journal of Tolkien Research (founded 2014). His anthologies of fantasy literature include Tales Before Tolkien (2003) and Tales Before Narnia (2008). More Tales Before Tolkien is due out in 2020. He is also managing director of the small publishing firm Nodens Books.

Besides his blogs on Tolkien and Fantasy (mostly Tolkien-related) and A Shiver in the Archives, which highlights literary discoveries, he contributes to the blog Wormwoodiana, devoted to classic "literature of the fantastic, supernatural and decadent." And for those with even more rarified bibliophilic tastes, he also does a personal blog for Lesser-Known Writers.
Two blogs are devoted to favorite neglected writers Leonard Cline and Kenneth Morris.
Links to recommended online articles can be found at Blinks: Read and Recommended.